Javascript is disabled on this browser.
Javascript must be enabled for this website to display and function correctly.
Home  »  Education  »  Magnetic Poles

The geographic poles are the points where the axis the Earth rotates around meets the surface, and are antipodal (symmetrically opposite) at +/-90° latitude.

The most common understanding of magnetic poles is that they are the positions on the Earth's surface where the geomagnetic field is vertical. These poles are called dip poles, and the north and south dip poles do not have to be (and are not now) antipodal. In principle the dip poles can be found by experiment, conducting a magnetic survey to determine where the field is vertical.

Another definition comes from global models of the geomagnetic field. Models of this type, such as the International Geomagnetic Reference Field (IGRF) include an equivalent (but fictional) magnetic dipole at the centre of the Earth in their representation of the field. This dipole defines an axis that intersects the Earth's surface at two antipodal points. These points are called geomagnetic poles. The axis of the equivalent dipole is currently inclined at about 10° to the Earth's rotation axis. The IGRF can also be used to compute dip pole positions. These model dip poles do not agree with the measured dip pole positions. The geomagnetic poles and model dip poles cannot be located by direct local measurement.

The locations of the model dip and geomagnetic poles are shown below, and given in the table at the bottom of the page. 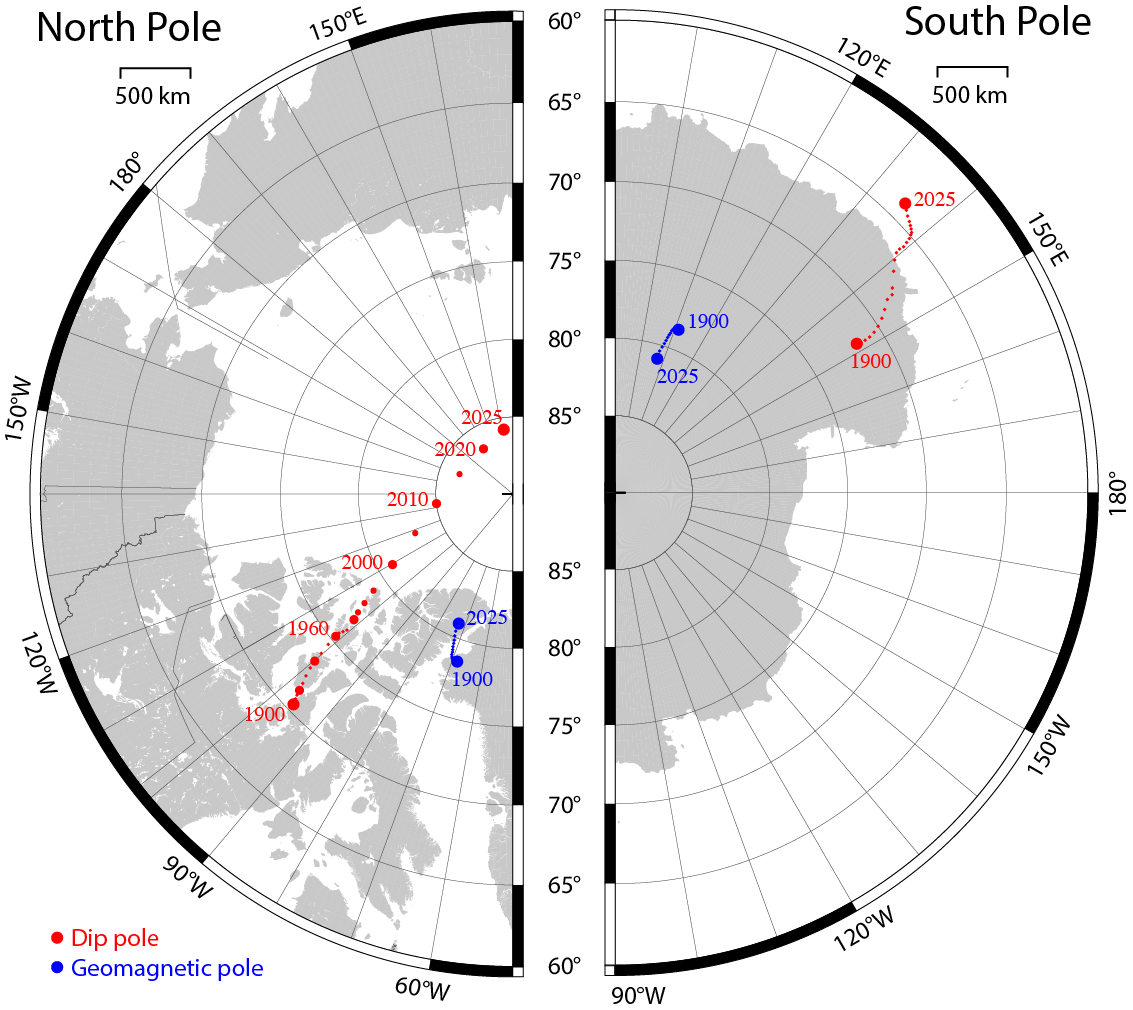 In practice, there are many difficulties in the experimental determination of the locations of the dip poles, not least the remoteness and harsh climatic conditions. The main difficulty arises from the rapidly varying magnetic fields which originate in a region of near-Earth space called the magnetosphere. This region is defined by the pressure of the continuous stream of charged particles from the Sun, the so-called solar wind, on the Earth's magnetic field. Many dynamic electrical current systems exist on the surface of, and inside the magnetosphere and are connected to the ionised upper atmosphere at high latitudes. As a result, the dip poles move considerable distances over one day, tracing out approximately oval-shaped loci on a daily basis, with large variation from one day to the next depending on solar activity.

Another complicating factor is the presence of magnetic material in the underlying rocks, i.e. the crustal magnetic field. This is not included in models such as the IGRF but may be another reason for differences between the model dip poles and measured dip poles.